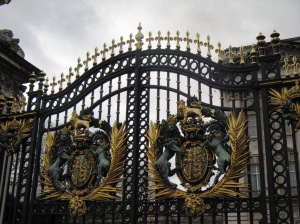 Get on your walking shoes for this day trip to see Buckingham Palace, Big Ben and to visit Westminster Abbey, all considered some of London’s top ten tourist attractions. They are located in a part of London called Whitehall and Westminster (a name I discovered came from “minster” or abbey church).

From St. Johns Park tube station, it’s a quick walk to Buckingham Palace where most tourists were posing for quick photos. You have to time your visit just right to see the of the changing of the guard (around 11:30 in the morning) so after a few obligatory photos, I moved on.

Ten minutes later, after a stroll along pretty St. James Park, I arrived.   The Abbey is London’s oldest and most important church with over 1000 years of heritage and is also the famous resting place of Britain’s monarchs as well as the setting for coronations. Imagine seeing a coronation chair first used by King Richard the First some 800 years ago and again by Queen Elizabeth in 1953!

When the young Queen Elizabeth II was crowned on a rainy June day 45 years ago this Tuesday, a nation rebuilding itself at last glimpsed a bright new future. The Coronation touched the lives of all who witnessed it, and here eight people share their different memories of a momentous occasion.

The architecture in Westminster Abbey is beyond spectacular and fortunately, you are offered headsets for your personal visit to better understand the various styles. From the French Gothic of the nave to Henry VII’s Tudor style chapel, there are impressive examples of medieval architecture.   Still, you should be prepared for a fairly steep entry fee of 20 GBP.

Since the Abbey is still a place of worship, I later noticed that there is a second entrance for religious worshipers and free of charge. Indeed, as nearby Big Ben struck 12 noon a priest asked for a moment of silence while he led a short advent prayer.

In doing some research, I ran across this amusing tidbit from writer Alexis Brett called “The Story Behind the Bearded Lady Statue”. 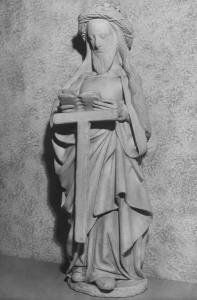 “The statue of Saint Wilgefortis (or commonly known as the bearded woman statue) which is located in the Lady Chapel of Henry VII, has quite an interesting story in itself. Apparently legend states that Saint Wilgefortis used to pray to be made ugly in order to escape a forced marriage, and her prayers were soon answered when she grew a beard. Because of this, she became the patron saint of women who “wish to be liberated from abusive husbands.”

British monarchs as well as a number of other notables like Isaac Newton, Charles Darwin and Dr. David Livingstone. I also enjoyed seeing The Poets Corner with plaques for Jane Austin, Charles Dickens, Robert Burns, T.S. Eliot, Lord Byron, the Brontë sisters, Dylan Thomas, and many other famous individuals.

Today’s visit felt richly fulfilling in a much different way than visiting London galleries, parks and gardens or markets. With such elegant architecture, history and tradition, Westminster Abbey offered me a quiet sense of awe.  I was also very impressed that everyone actually respected their “no photos” policy. How refreshing to be techno free for an hour or more, soaking in the aura of one of London’s most remarkable sites.