No travel destination in the world excites the imagination more than Egypt – the Sphinx and the fabulous pyramids at Giza, the tombs of the Valley of the Kings and the awe-inspiring monument at Abu Simbel. SAT’s Pyramids & Nile Cruise tours take in all the highlights of this fascinating country. The great city of Cairo with its medieval mosques and modern skyscrapers is usually the starting point. As well as visiting the pyramids here, you can haggle with the merchants in the bazaar and wander awe-struck through the amazing collection of treasures in the Egyptian Museum. Today’s city of Luxor is the site of the ancient Egyptian capital of Thebes and there are several sensational sights to be seen: the great temples at Karnak and Luxor, the Temple of Hatshepsut at Deir El-Bahri and the tombs of the Valley of the Kings. For the ancients, the Nile was a sacred river and the lifeblood of the nation. Fittingly the centerpiece of our trip is always a cruise on the Nile, travelling the same highway that the Pharaohs themselves travelled, watching forty centuries of history drift by. 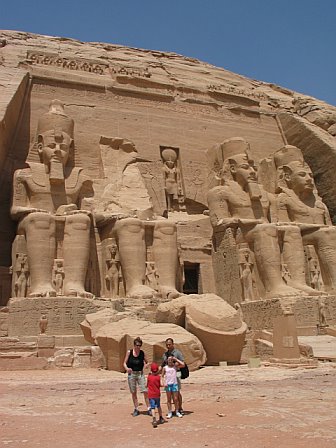 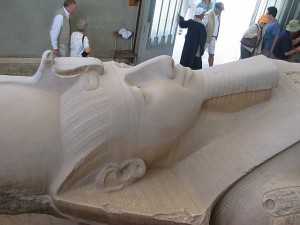 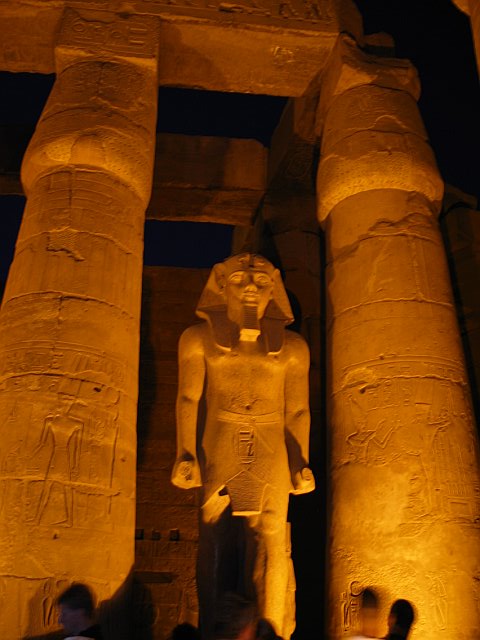 Depart on scheduled Egypt Air flight direct to Cairo. Dinner on the flight. Met at airport by SAT’s representative. Visas issued on arrival at the airport. Transfer to Oberoi Mena House Hotel at the foot of the pyramids of Giza.

A full day excursion to see the last remaining wonder of the ancient world: the pyramids of Egypt. The day begins with the Great Pyramid and the Sphinx and there is plenty of time to explore this historic site. In the afternoon there is a visit to the magnificent stepped pyramid of Djoser at Saqqara, dating from the 27th century BC. Dinner is included at the hotel tonight.

After breakfast at the hotel, depart for a visit to the Citadel of Saladin and the Khan El-Khalili Bazaar. Lunch is included at the Oberoi Naguib Mahfouz restaurant. In the afternoon, a tour of the Egyptian Museum to view the most famous treasures of Egypt, including the priceless collection found in Tutankhamun’s tomb. The evening is free to enjoy the superb cuisine of this hotel’s fine restaurants.

An early start today. Transfer to Cairo Airport for the flight to Luxor; and then transfer to M/S Mövenpick Radamis II. After check-in, lunch will be served on board. In the afternoon there is an excursion to see the great temple complex at Karnak with its fabulous colonnaded hypostyle hall. Then there is a visit to the wonderful temple at Luxor, with its majestic colossal statues of Ramesses II.

This morning there is a tour of the Valley of the Kings, where archeologist Howard Carter found the tomb of King Tutankhamun filled with golden treasures in 1922; then a visit to the temple of Queen Hatshepsut at Deir el-Bahri; and time to view the historic Colossi of Memnon and to haggle with merchants for lovely carved alabaster figurines of the Egyptian gods. After lunch the ship sets sail up the Nile. Time to relax and enjoy pool and sun deck on the Radamis II. All meals are included on the cruise – breakfast, lunch, afternoon tea and dinner. Cabins are equipped with TV, international telephone and wireless internet connections. The ship passes through the lock at Esna and docks overnight at Edfu.

Inhale the cool early-morning air at the spectacular temple of the falcon-headed god Horus. Lunch on board, while sailing to Kom Ombo, where there is a visit to the temple jointly dedicated to Horus and the crocodile god Sobek. Catching the afternoon sun’s rays on this exquisite building is a photographer’s dream. Dinner on board as the ship sails on to Aswan.

A full day to explore the treasures of Aswan. Visit the High Dam, take a boat trip to the Philae Temple and see the unfinished Obelisk at the Granite Quarries. This afternoon take a ride on the Nile in a traditional Felucca boat. The Egyptians have been using these simple sailing craft since the days of the Pharaohs. Final evening on board.

Transfer to Aswan airport for an excursion today to the awesome monument of Ramesses II at Abu Simbel, dominated by four giant statues of the pharaoh, sixty feet high, hewn out of the rock face. Fly on back to Cairo and overnight at the JW Marriott Hotel.

Check out after breakfast and transfer to Cairo Airport. Morning flight home, arriving in the early afternoon.

To request additional information and pricing, contact us now.