Tanzania’s Serengeti National park is the scene of one the wonders of the natural world – the great migration. Two million wildebeest, zebras and gazelles are on the move across this vast treeless plain with the big cats following close behind. The migration follows a regular annual pattern. Calves are born in the south of the park near Lake Ndutu and in the Ngorongoro Conservation Area in January and February. In March and April the migration has moved to the central Serengeti and by August and September it has reached the Maasai Mara Reserve across the border in Kenya. In November and December the herds move south, reaching Ngorongoro in time for calving in January and February once again. There is more to the Serengeti than the migration however – there are elephants here and giraffes and in the GrumetiRiver to the west, there are some very big crocodiles. 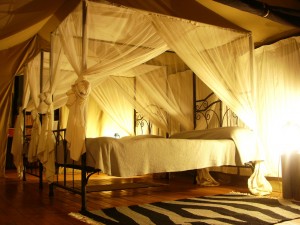 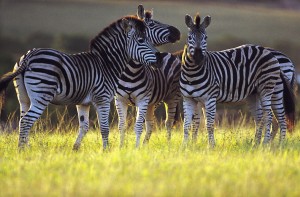 Arrive Dar Es Salaam and take the short connecting flight north to Arusha. Transfer to the Tarangire National Park, famed its forests of baobab trees, its huge herds of elephants and some of Africa’s largest pythons. Perhaps you might see one of the tree- climbing lions that live in this area. Dinner and overnight Lake Burunge Tented Camp.

This morning drive to Gibbs Farm for lunch and a visit to the nearby waterfall and elephant caves. Continue to the Ngorongoro Conservation area. Dinner and overnight Plantation Lodge.

Today there is a tour of the Ngorongoro Crater. Formed by the collapse of an extinct volcano, the crater is its own secluded little ecosystem with the largest concentration of animals anywhere in Africa. There is a picnic lunch in the crater, while you explore amongst the rhinos, hippos, zebras, wildebeest, lions and cheetahs. Dinner and overnight Plantation Lodge.

After breakfast drive north across the plain to the Olduvai Gorge and see the place where some of our earliest human ancestors were found. Continue into the Serengeti National Park for your first sight of one of the greatest spectacles on the planet – the Great Migration. Two million wildebeest, zebras and gazelles will be in the Southern Serengeti in March, in a massive herd stretching out as far as the eye can see. Afternoon game drive. Dinner and overnight Mbuzi Mawe Tented Camp.

Get up before dawn today to try one of the great experiences of the world of travel – a balloon safari over the Serengeti. The word “serengeti” means “endless plain” in the Maasai language and you will understand why they call it that, when you see the vast savannah spread out before you. This optional excursion costs extra and must be booked in advance. Morning and afternoon game drives in the Serengeti. Watch out for cheetahs and lions and leopards here – and in the rivers, there are crocodiles. Dinner and overnight Mbuzi Mawe Tented Camp.

After breakfast transfer to Lake Manyara National Park. There is plenty to see on your first morning game drive – elephants, giraffes, wildebeest and impalas are all here as well as large troops of baboons. Check in to the Manyara Serena Safari Lodge in time for lunch. Three meals a day are included throughout the trip. Afternoon game drive in the park: the lake itself is one of the most beautiful in the region and is home to a large population of hippos. Dinner and overnight at the Manyara Serena Safari Lodge.

This morning there will be one last game drive in the park. After lunch transfer to Arusha Airport for the short flight to Dar Es Salaam. Dinner and overnihgt Kempinski Kilimanjaro Hotel.

To request additional information and pricing, contact us now.