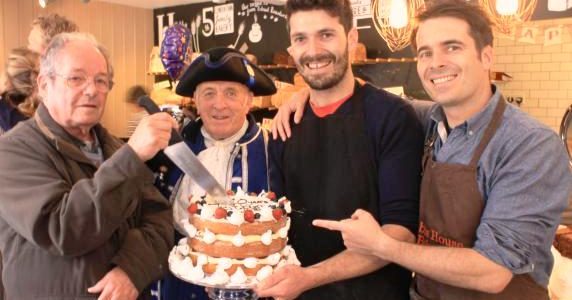 Lots to Love About the Cotswolds – Hobbs Street Bakery

30th December 2015adminSAT2No CommentsTravel in England, What to Enjoy in the Cotswolds

In another life, I’ll surely come back as a baker!  This December,  I had the distinct pleasure of interviewing the folks behind the scene at Hobbs Bakery, only two steps away from my International Property Shares home in Tetbury, England.

My own interest in baking started about 20 years ago while living in a country farmhouse outside of Portland, Oregon. Our Sears and Roebuck house had a proper kitchen with views of free range chickens and Scottish Highlands grazing in the fields beyond.  For kitchen warmth  we kept the wood-burning cook top stove fired up and a pot of chili or soup stewing most of the time.

This, in turn, inspired making sourdough bread to accompany this comfort food. In Oregon, one always has bragging rights about the age and origin your sourdough starter. Ours, we claimed, came from an Oregon high desert baker some 50 years past! I digress…

Hobb’s House Bakery had a festive feel this evening.  In one hour, the  Light Up Tetbury event would begin with caroling, a big “switch on” for the market center lights, mulled cider, snacks, and children trailing balloons outside the door.

“Hello” I cried out, approaching the bakery. Opposite me was a range of  breads  from baguettes to spelt, sourdough, whole wheat and rye. Temptingly close were beautifully displayed  gourmet desserts and patisserie.  “Can you start by telling me what’s popular during the Christmas season?” I asked.

A sweet-faced young woman named Izzy stepped forward. “Well, our Christmas bars are always a favorite. And of course the mince pies. Perhaps our gluten free mince pies sell even better than the regular variety” she offered. That was a surprise. Nearby was a beautifully wrapped Christmas fruit cake as well.

Izzy is one of the fifth generation of the Hobb’s Family Bakery,  which was established in the 1920’s. She’s been working there for five years now.  The Hobbs House headquarters are in Chipping Sodbury, once the family home. There you can take master classes in bread and cake making, chocolate workshops, sausage making, or like me, stop by for a cuppa and a yummy dessert.

Hobbs House also makes an award-winning sourdough bread which I felt obligated to buy and, of course, compare with my own. It stacks up rather well I think.   Is this due to its 59 year old sourdough mother??*

Just as I was about to leave, the town crier, Peter, and his wife Joan arrived dressed for the occasion.  They were taking a minute to fortify themselves on a mince pie before heading off to the Light Up Tetbury duties.

There are lots of reasons to love the Cotswolds and Hobbs House Bakery is one of them!

* Do you know why sourdough starter is called “The Mother”?